I don’t watch the news. I’ll check the weather and that’s about it. I don’t watch sports, either. Yeah, I’m pretty kept to myself and tend to deal with things in my lane that directly affect me. That being said, I haven’t been able to avoid all the hubbub about what’s going on in Virginia right now. It truly is a bad deal.

Being a veteran I’m tied into many veteran groups and am friends with many on social media and in my personal life. Supporting veterans and keeping my ear to the grindstone on military issues not only interest me but are important to me. The thing that caught my attention yesterday was talk of using the Virginia National Guard to enforce new gun laws that Virginia could potentially be subject to. All of this pertains to legislation introduced in the Virginia Senate. If you care, you can read all about SB16, or Senate Bill 16. I’m not going to get into a gun control debate, here. I’m ALL the way over here in Missouri so it doesn’t really affect me, right? Not necessarily. These things tend to eek their way over state lines. It doesn’t scare me and I’m not a prepper or someone who’s gonna get all worked up over it. I’ll struggle for a while for an eternity in Heaven. The main thing that hits me was the whole National Guard thing. The “sancuary counties” is another interesting development; as well as their creation of county militias. This whole thing is just bad. If anything, the citizens of Virginia might possibly want to stand back and take a bird’s eye view of the situation. The Virginia Congress is pushing this whole thing, thus creating this great divide in the state. Take that to heart next time elections roll around. Who really is the culprit here?

You may not be a supporter of firearms or gun owners. That’s OK. Those folks may not be supporters of protests and flag burning. Point is, sometimes you take the punch in the gut. Just because it doesn’t align with your beliefs or what you “like”, doesn’t mean you burn it down. There is an ebb and flow to harmony.

Yes, I support OUR second amendment. I support it as much as I support the 13th Amendment, the 1st Amendment and all others. I support our constitution, and Bill of Rights, period. I swore to “uphold and defend The Constitution of the United States”. When I made that “Oath of Enlistment”, it doesn’t only apply during my time of service in uniform. It lasts a lifetime to me. For any state government to threaten use of their military against their own citizens is just wrong. Helloooo Nazi Germany, Cuba, Venezuela, etc. It puts their citizen soldiers in a very precarious position. Proposed laws voted into law are a funny thing. Why? Because if you have a majority of a certain party RULING the state congress, they win. They can do what they want and citizens who don’t agree, suffer. Yes, these people are voted in office but their is always opposition. To come down so hard on such a sensitive matter, basic American constitutional rights, is wrong. They are stirring the pot for a major disaster. What’s interesting is that Virginia was also the first state to succeed from the union prior to the Civil War.

Like many other issues we’ve had arise in many states over the years, hopefully this one is short lived. I don’t like the divide we have in our nation. It’ll always be there because of free will and the choices we have that come with FREEDOM. The United States is the greatest nation on the planet. Please, Virginia congress, don’t taint it. Let this fight go.

To the soldiers of the Virginia National Guard, remember, just because a state law is passed, that does not supersede our nation’s laws and rights as Americans. It’s OK to stand up against tyranny, unlawful orders and anything else that is just morally wrong. 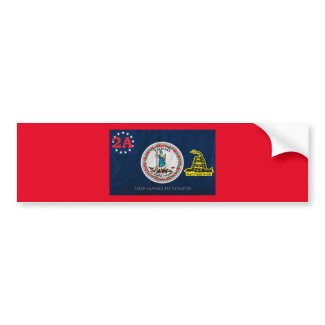