“I write because I don’t know what I think until I read what I say.”

I enjoy writing because my mind is like a freight train chugging across the country. It never stops moving. In my world everything I think is important. Many times it’s just a thought that passes by but sometimes I really feel I need to share it. Enter…WordPress.

There are a lot of people hurting out there. People who are broken for many reasons. People who feel hopeless and lost. A lot of those people are my fellow veterans and I hate it for them. I never thought I was one of them. I just thought I was another “Dysfunctional Veteran” who had deployed. I never realized that my experiences over the years around the globe would compile into the story I have today. My story is a long one and starts on day one, my birth, but I’ll not start there. As a matter of fact I’ll keep it short and to the point and close with how I was able to be pulled from the hole.

Like many vets I’ve had multiple deployments. My first deployment to another country was in 1996. I volunteered to go to Kuwait with a brigade sized element for Operation Southern Watch. My unit was a Field Artillery unit where I served as a 13B Field Artillery Cannon Crewmember “Gun Bunny”. On this particular deployment I volunteered to go as a fueler cause they needed to guys to drive fuel truck for the battery. I wanted to go do something. I was 21 years old. The deployment was supposed to last 2 months but a week before we were slotted to return home we were informed we’d be staying another 2 months. That was all fine and dandy but I missed my older sister’s wedding.

Fast forward to 1999 and my deployment to Kosovo. Three guys in our unit were captured in Serbia and sat in captivity for about 30 days or so. Good ole Jesse Jackson went over and talked the Slobodan Milošević regime into releasing them. Shortly after, we carpet bombed the crap out of them for about a week. June rolled around and we began loading our helicopters onto C141s at Ramstein Airbase in Germany. After being a “Cannon Cocker” I had reenlisted to be an OH-58D(I) Helicopter Crew Chief. I really enjoyed that job. It was fun and I had the opportunity to fly a LOT! I was, however, in the Cavalry which meant my second home was with the family and my first home was the field. We landed in Skopje, Macedonia and stayed there for about a month before our push into Kosovo and onto Camp Bondsteel. That was my first experience with death. One soldier from the 173rd Airborne had “burned in” when they did their jump into the AO (Area of Operations). His parachute never deployed. Watching him fall and hit the ground was an eye opener. Then came the soldier killed on a Bradley. I was told to take part in the ceremony loading his body on the C130 to fly him back to Germany. Other than the occasionally indirect fire from the “Mad Mortarman” and sporadic AK fire the trip was pretty chill. 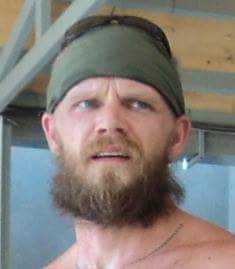 After the bombing at the World Trade Center EVERYONE was spun up for war in Iraq. That was the real life changer for me. The deployment was like a Quentin Tarrantino movie. We actually thought about writing a script while we were there. I have many stories about that yearlong deployment. The kid who enlisted at 17 and on his 18th birthday his HUMMWV (Humvee) was hit with and IED and killed everyone in the truck but him. He had pieces of skull and other people all over him. The soldier shot through the arm riding on top of a HEMMT truck with blood running down the windshield and he was totally chill. The Iraqi whose brains I stepped in by accident on the side of the road after rolling up on a traffic accident. See, I was with a transportation unit at this time. I had left Active Duty in 2000 and joined the Army Reserves back home. We were a Highway Regulation unit which meant we were on the road every day in Iraq doing convoy escorts or route recons. New Year’s Eve 2003/04 I was at Camp Diamondback with my best buddy from high school. Right at midnight the Booger Eaters starting sending mortars our way. They were impacting about 50 meters from us. The sound right before a mortar hits is very unique and the splash the shrapnel makes is kinda pretty. That whole year was just nuts. No laws, no rules and essentially no ROE (Rules of Engagement). Our commander told us to shoot anyone we see with a cel phone on the side of the road. I didn’t do that but thought that was interesting. He never left the wire because he was a spineless coward. Oh, and I had Dysentery for about 2 weeks. Worst situation imaginable.

After Iraq I came back home and planned to go back to work with my dad. That lasted about a month and I about lost my mind. So I sought after work in the world of Private Military Contracting. I was hired by Blackwater in 2004 and went to train up and work in 2005. I contracted from 05-12 as a “static” and “mobile” operator for Uncle Sugar. That was where I had the most “fun” and made the most money of my life. That was also when I had my first true gunfight and I LOVED it. There’s something very distinct about the sound of a bullet whizzing/snapping past your head between your buddy and you. There is also something very distinct about placing that red dot, holding over, on another man and sending a burst of lead towards them. Love that MK48! I had become a war junkie. Gym, Run, Shoot was our motto. Too much happened at that time to talk about but it was all good. I could literally write a book about those 7 years alone. In 2012 I was in Kandahar, Afghanistan when I tore my right knee. They sent me home and I never returned. Two surgeries and my knee never improved.

I owned a CrossFit gym at the time so that was nice to have something to fall back onto. I really enjoyed doing CrossFit with my bros overseas. I had opened my gym in January 2011. I had the gym until I decided to close it in November 2016. Over the years I became more distant and pretty much hated everyone who wasn’t blood or a war buddy. I was a mean person who was very unhappy. Luckily for me, a buddy of mine was watching me. He must’ve been following my downward spiral on Facebook. Politics, the election, etc. all made it worse. I was losing it. After the recent presidential election I chose not to read or follow any news. I just couldn’t handle it anymore. I was at the point I was ready for a civil war or government takeover. I felt I had no purpose in life and I hated the thoughts I had in my head. I had no outlet and no one close by who understood. It was bad. I was eating pain meds to cope with the daily pain I had in my body. My buddy who was watching me invited me to a combat veterans retreat in Bluemont, VA. The thought of a retreat about made me want to vomit. He asked me, “Bro, do you trust me”? I told him I did and was all in. My wife supported me and I knew something needed to change. My daughter moved out when she was 17 cause she couldn’t stand living at home with me anymore. I’d be lying if I said I never thought about suck starting my Glock. I’d never do it cause I’m not a quitter but I had to find something.

February 2017 I attended Boulder Crest Retreat. I met a great group of guys who I consider brothers, now. BCR changed my life. I was able to understand so much more and realize there was nothing wrong with me. Instead I was able to realize what happened to me. It all started when I was a kid. After BCR I came home and was ready to take on the world!! I was excited and felt a sense of purpose, Help People!!! YES!!! That was my calling. The problem with that is I didn’t know how. My wife introduced me to some health products in April. I was still having daily chronic pain in my body and fighting the addiction to pain meds. I started taking these products and 3 weeks later I was pain free. It was a miracle!! I thought it was placebo at first but it was real and stayed with me. To date, I have not taken one pill. Not even for a headache. I shared the health products with my mom and the same happened for her. My wife informed me that she signed me up to sell these. I thought, “Oh HELLLLLL no!! I am not a salesman”! After changing my thought process from being a “salesman” to being a “problem solver” things turned around for me. I have absolutely LOVED meeting new people and helping to impact lives with these products. I have sold quite a bit of product to people and have been able to help people with all sorts of health issues. That gives me joy. Kyani is an outstanding company and I enjoy the opportunity to meet new people and listen to their story. See, everyone has a story. If we would just stop our mouth muscle from working and listen to people, we can learn about each other. People are amazing!! I am absolutely loving this!

Well, there you have it. I have felt compelled to put this on paper for quite some time. My story is still developing each day. I’ve met some awesome people this year between Boulder Crest Retreat and my journey with Kyani. I look forward to waking up every day knowing the opportunity to reach people and help people is there. That is how I fell into the “hate spiral” and have been able to be pulled out of it. Doing good, treating people right and learning to love and serve people. It is so rewarding and I look forward to telling my success story a year from now. I love you all!!! Have a great day.

If you like what you’ve read, please share. Someone out there may need to read this. You never know, it could save a life.

My Kyani site. Please take a look!! Someone you know needs this.

2 Replies to “A Brief Synopsis of My Story”